To say Crete is a crossroads of history is not an exaggeration. From the mysterious Minoans, empire building Romans, to the seafaring Venetians, or the conquering Ottomans and Turks, through heartbreaking Greek civil war, Greek unification, and its significant role during World War II, Crete has a fascinating history.

Though many conquerors have come and gone, the people of Crete retain their fierce independence, passion for freedom, and unique culture.  Today, evidence of their vast history is clearly evident and accessible to tourists.

Exploring the older sections of the cities of Chania and Rethymnon is like stepping back into a neighbourhood in Venice, minus the canals.  Stunning 15th and 16th century architecture, still in practical use today, is seen throughout the harbor front areas.

Evidence of Turkish occupation can be seen in the remains of the lovely minarets, mosques, and hamams and in some of the houses of the smaller villages like our own village of Aspro.

Byzantine churches – from soaring architectural wonders to tiny cave churches tucked away on a high mountainside – are home to exquisite sculpture and icon painting.  Some of these churches date back to the earliest years of Christendom, as its influence spread to Crete.  Some of Christianity’s earliest founders were in Crete, including the Apostle Paul and Titus.

Archaeological ruins can be seen everywhere in Crete.  A walk in the city of Chania takes you past 16th century Venetian houses to the archaeological ruins of ancient Kydonia. A drive through the countryside will take you to mysterious Minoan tholos tombs or remnants of ancient walled cities.  A Frankish fort can be found on the south shore at Frangokastello

The site of Aptera, just 15 minutes drive from Villa Calista and visible from our terrace, allows you to see Minoan ruins dating back 3,000 years and includes structures from Roman times, Byzantine, a Turkish fort and WWII German gun emplacements – how’s that for a full sweep of history!

Of course any visit to Crete for history lovers must include a visit to Knossos just outside of Heraklion – an easy day trip from Villa Calista. While its reconstruction is now considered a bit fanciful, you do get the idea of what a Minoan palace was like.  Archaeology buffs will appreciate a visit to Gortys and Phaestos too. 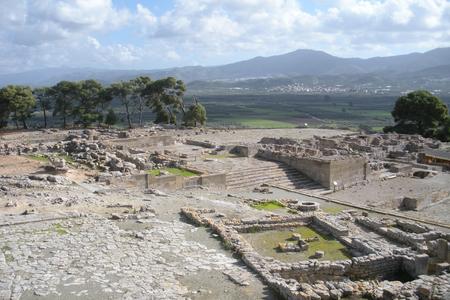